Contrary to popular western belief anno 2019, same-sex relations are not illegal in China and the country does indeed feature a maturingly colorful LGBTQ scenery. Nevertheless, Beijing, unlike Taipei, as of yet holds no interest in legalizing same-sex marriage and does indeed launch the occasional crackdown on gay content — both on- and offline. It’s all about maturity in motion.

Pioneer Shout-Out! Ma Baoli (aka Geng Le ) and his team have been educating people on disease prevention and control, especially on HIV and AIDS, via online and offline activities. Image comes courtesy of China Daily

China’s acceptance of the U.N. Human Rights Council’s recommendations on LGBT+ rights on March 19 was hailed a “milestone” by gay rights groups who incessantly urge Beijing to work with activists in the struggle against inequality.

China agreed to five recommendations on LGBT+ issues made under the Council’s Universal Periodic Review, including “adopting legislation banning discrimination within a year,” stated U.N. spokesman Rolando Gomez. The Geneva-based Council reports on alleged human rights violations in each U.N. member state every five years and is currently reviewing China.

Floating from that Geneva lake to the Shanghai harbor… Let us regale you with one LGBTQ fashion raconteur’s scrumptiously titillating tale. 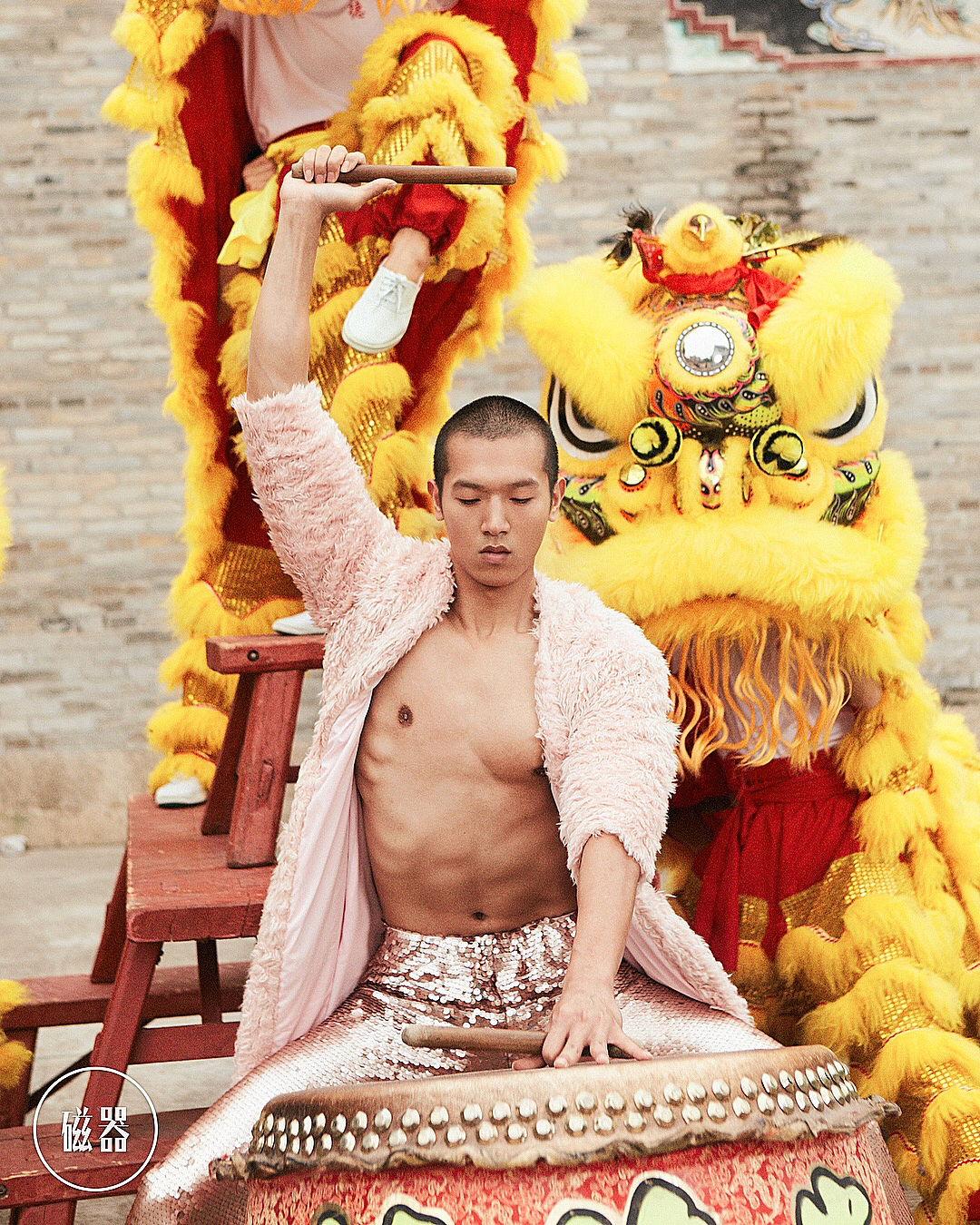 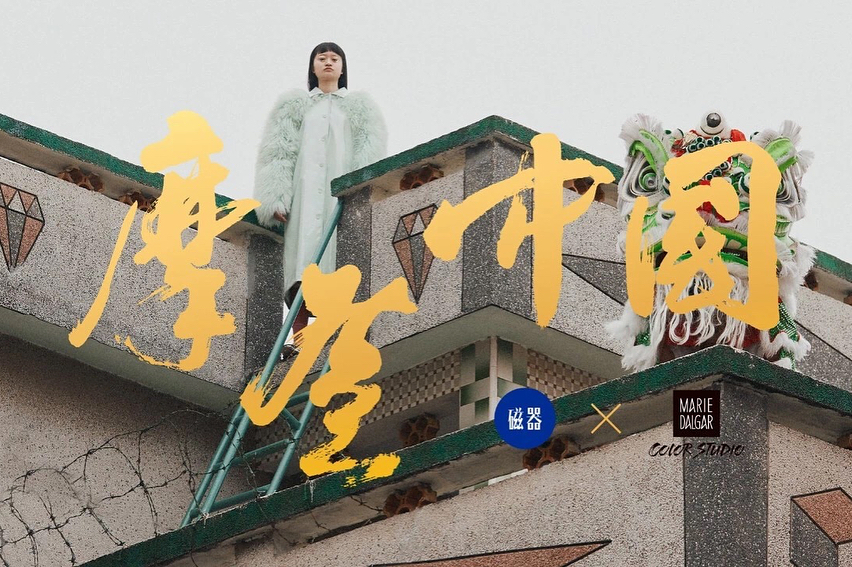 Same-sex relations are not illegal in China, which has a vibrant LGBT+ scene. But the government has shown no interest in legalizing same-sex marriage and launches periodic crackdowns on gay content online or elsewhere. For example…

The censorship of lesbian content on China’s popular microblog Sina Weibo, on April 13, sparked fears of a deepening crackdown targeting gay users, one year after a public outcry pushed the platform to backtrack on a similar attempt to remove such content.  Sina Weibo (China’s Twitter-esque platform) users discovered they were unable to access a popular “les” (short for, well, what’s in an abbreviation, “lesbian”) online discussion group.

According to a Financial Times report on the digital happenings, “the discovery set off a flurry of angry posts, pushing the term ‘les’ into Weibo’s top search terms, as users proclaimed ‘We Are Les’ in a show of support for those protesting against the censorship.”

A campaign launched by Weibo in April 2018, attempted to remove homosexual content, lumping it in with violence and pornography, but the company reversed its decision after an outpouring of anger, threats of legal action and a flood of personal letters to the company from the lesbian, gay, bisexual and transgender community. 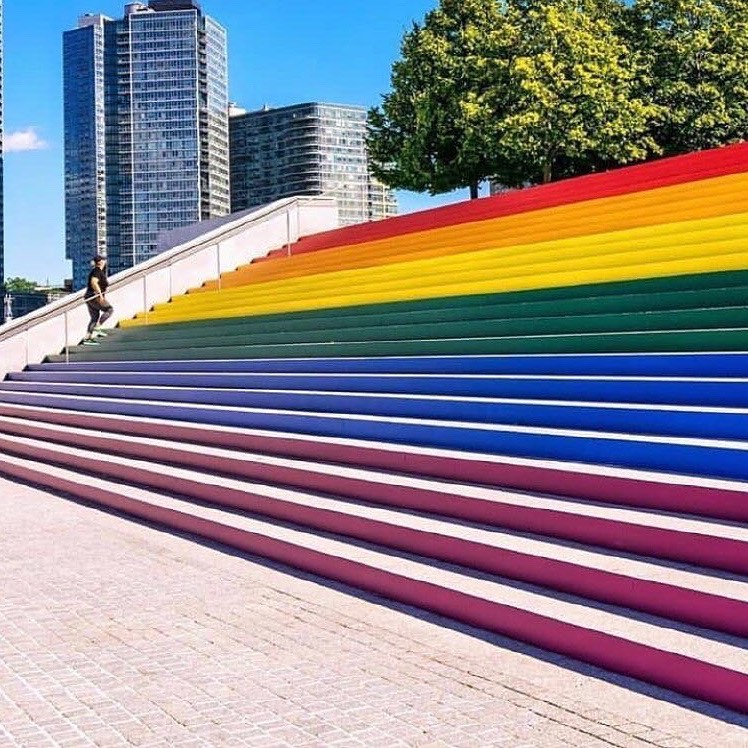 Raconteur and cultivator of dandy-flamby style Queer Supreme Quentin Crisp (1908-1999) once mused, “The consuming desire of most human beings is deliberately to plant their whole life in the hands of some other person. I would describe this method of searching for happiness as immature. Development of character consists solely in moving toward self-sufficiency.”

Designer, outspoken LGBT activist and fitness fanatic Li Yiyang (李益阳 in Chinese) was born in a small city somewhere in central China and from an early age onward was highly influenced by his father’s teachings in traditional Chinese painting and calligraphy.

How does the development of China’s fashion scene move toward the maturing of the nation’s LGBT community and culture? 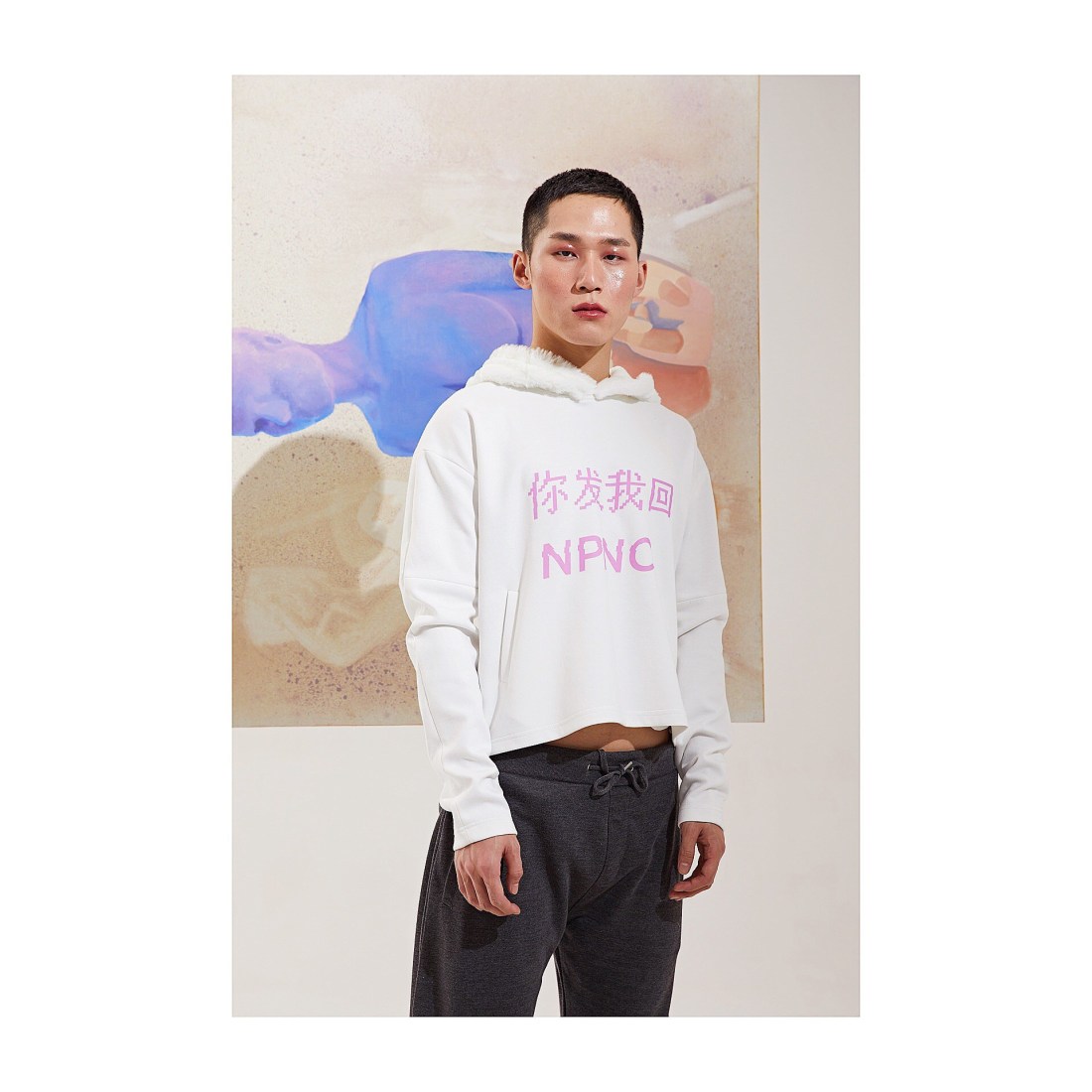 That slogan. 你发我回|nǐ fā wǒ huí in Chinese translates as “you send, I reply”. NPNC: No Pic, No Chat. Speaks for itself. Design by Li Yiyang for LYAN, 2019. All rights reserved

That earring. 女|nǚ in Chinese translates as “woman”. LYAN. Design by Li Yiyang, 2019. All rights reserved

From LGBTQ Activism To  Active Branding

Teenage Li went on to attend the Affiliated Art High School of China Academy of Art (CAA) and graduated with a degree in contemporary art. Currently living in Shanghai, Li set up his own brand — where deconstructivism meets positively constructive art: LYAN.

Li’s silhouettes present mosaical imagery with his roots, the grounding roots of those central Chinese grasslands, running throughout like a thread made up of reflective badges. From birth to boyhood and urban residential adult life in which sexuality by individual choice and society of non-exclusivity are key,

My art work or designs are not limited by my choices of medium or subject matter. I relate my work to my life experiences, as well as my personal and social identities. I wish to create art that society can relate to through a shared personal experience.” Designer Li Yiyang

Li’s designer collage respects tradition, yet at the same time strives to build something new, something modern and outspoken. His collage defends the right to just be who you are, all the while paying respect and tribute to the past struggles that have won China’s millennial generation the right to do just that. To just be you.

The outfits people wear, reveal the most obvious information about them as individuals in and to the world. As LI phrases it, “they represent our thoughts, they show a major glimpse of who we are, where we are going, what kind of person we want to be, what we are working toward and who we want to be.”

The outfits’ united hemlines are the soundtrack to one lifetime.

Speaking of revelations, when it comes to design aesthetic, Li draws the following never-conclusive and all-inclusive patterns:

“I’m breaking the boundaries between male and female, blurring the borders using Chinese elements – my roots – in a global and modern art/design environment, and touching upon the linings of contemporary fashion. After all… What defines ‘manly’ what constitutes ‘girly’? It’s a free life. celebrate it.”

Dress to the nines clad in a three-piece suit finished off with a pair of high heels or throw on a fairytale skirt and tuck in that tuxedo shirt, The Stromae “Tous Les Mêmes” vibes are pervasive. The LYAN brand, as well as its message, are non-labeled. Very outspoken, and refreshingly so, when it comes to his sexuality, Li celebrates his love for (Shanghai’s) queer culture through art:

“This is who I am. Being gay and advocating a healthy environment that celebrates every and any type of (non-) sexuality is part of my roots. And my identity; it made who I am today, but this is not just about me, one Chinese gay man, this is about something bigger than one individual… It’s about the evolution of Chinese [urban] society.”

An increasing number of Chinese millennials in the past five years have joined the offline (i.e. physical) LGBT communities across the nation’s first-tier cities, Progressively comfortable with their sexual orientation, admittedly known or unknown to their next of kin, this generation moves forward China’s relatively newborn open and outspoken notion of equality in sexuality. China’s “other”-sexuals: From social sinners to soul-seeking saints in the time span of 20-something years.

Nevertheless, despite this spectacularly optimistic and colorful picture of the Middle Kingdom’s sexual urban landscape anno 2019, one must remember:

This evolution and sexual revolution take place mainly across the nation’s largest first-tier cities. More specifically, mainly across their all-embracing and exclusive niches of fashion, art, and design. There is still much work to be done. Tread gently.

Provocative Behaviorisms — Made In China

The LGBT community culture is a huge part of fashion culture and, what’s more important slash relevant, it’s where Li’s core passion is at. “I love queer culture and its full-on expressionism, and my designs at times do take a very queer angle,” Li explains, “Take for example the male lingerie line I designed a while back. It would be nice to do some kind of photoshoot starring not just male models, but Chinese hunks, twinks, twunks, drag queens, the works. Not cliché, but cheeky.”

Mixing up the craft of clothing design and that of the visual kind leaves much room for interpretation to come to artistic fruition. Build an installation, put it on a model. Take the model, put them on a runway. Put on a show, a performance.

There are no borders when it comes to fashion. Li’s professional turn-ons are all about the meeting halfway of art and academics:

“I am no Mr. Know-It-All. I should have (and should still) read more books; I’m not that kind of art guy whose work is solely based on theories and you have to buy the manual to guide you through his collection. Let alone understand its core concept. I just want to create art that society can relate to through a shared personal experience.

The most important thing is for this new art to usher the public into the next social phase. Getting society to listen more, be more understanding and accepting. Let the public be ready for our community. The New Made In China.”

The crossroads where fashion meets art can introduce the world to  China’s modern LGBTQ scene, presenting both the good and the bad, the hopes and the struggles.

EDITED BY ELSBETH VAN PARIDON FOR CHINA UNDER THE RADAR

SPOTTED A FAIL OR HAVE SOMETHING TO ADD? PLEASE LET US KNOW IN THE COMMENT SECTION BELOW OR EMAIL US AT ELSBETH@CHINAUNDERTHERADAR.COM

@thehotpotlab : "Our favorite installation, Bubbles, is also the most significant one inside our exhibition. These giant orange metallic balls symbolize the boiling bubbles in a Sichuan hot pot, famous for its spicy taste. The metallic texture of the material is chosen for its luster to mimic the boiling broth.
Loading Comments...
%d bloggers like this: