Long-lasting fashion trends, fashion fads, cultural expression, youth subculture; all these things inspired by music. Take electronic dance music (EDM); the whole underground scene is booming in China as of recent years. Time to explore the waves this androgynous sub-bass is causing through the boomboxes and the heads it sends spinning.

China’s Young Spinsters Are On The Rise

And we’re not referring to the nation’s so-called “leftover women” (剩女 in Chinese) this time around. Out with the traditional piano or violin classes: A number of young Chinese students are now learning to spin their records at DJ school. China mega-source Sixth Tone recently crafted a topnotch report on this, showcasing just how many young Chinese DJs, as young as 16, are playing Shanghai’s No.1 underground dance venues.

Let’s take DJ Gouachi (Shi Jiayuan) for example: Schoolgirl by day, DJ by night. How very Batgirl. Her soulful rhythms and bass heavy beats show off some clear talent and promise, which has already been recognised by the industry. Shi told Sixth Tone, “When I first started DJing, my parents were strongly against it, however, they now see it as a job and have come around to the prospect.” It really is all about that bass. And a savoring of mixing technique.

Gouachi dons a short black bob with a lick of red lipstick, trainers met with oversized sweaters; all in the name of simple and practical fashion. This style MO is something we can also expect to see with her grooving fanbase and those getting into the red levels at her gigs. A new open-mindedness regarding music can be reflected in fashion, with a more relaxed, carefree raving style now embraced by China’s budding underground clubbing scene.

The carefreeness surrounding music hasn’t always been the case in China. Buying foreign music has only been legal in the country for the past ten years and the government still closely monitors the country’s music scene.

The INTRO 2013 Beijing Electronic Music Festival was held at the Capital Steel factory (首钢| Shougang in Chinese), Beijing, on May 25, 2013. The festival featured 50 Artists and attracted 10,000 people to its 50,000 sqm open-air venue. Image courtesy of China.org.cn

The generation gap in China between young people and their parents is perhaps bigger than in the West due to the radical social changes China has seen in the past 20 years. The open-mindedness surrounding music hasn’t always been the case in China. Buying foreign music has only been legal in the country for the past ten years and the government still closely monitors the country’s music scene.

For many young Chinese electronic DJs, finding success can be challenging when online sources such as Soundcloud, Instagram and Facebook are blocked, particularly in this social, digital society we now live in.

However, nowadays parents, like DJ Gouachi’s, are giving their children the freedom to decide their own destiny — even if that means DJing until 5AM on the weekend.

China’s younger generations seem to have a desire to be different and unique, welcoming Western influences with open arms — hence the move away from mainstream pop music and in with the new EDM, underground and house.

DJ Chace . “In early 2016, he landed a phenomenal 4-track EP on Yellow Claw’s Barong Family label called ‘Destination’ that was praised by critics for its extraordinary level of artistic maturity. Not long after that he left China for the first time and became the first Chinese artist to play Tomorrowland [Belgium]. ” MixMag Asia

Raving Style: The A- And B-Sides

As for China’s global financial hub, Shanghai, there are two sides to the club scene: It appears to be either glitz or grit, no in-between.

A “show off” attitude pervades Shanghai’s ‘super clubbing’ culture. Garishly bright lights, loud Steve Aoki remixes and overpriced alcohol are three things you can expect at super clubs like MYST and LINX. This culture extends as far as fashion — with high stiletto-ed heels, bodycon dresses and suits — for both the men and women attending these venues. Dressing to impress is high on the agenda. What’s more, the aforementioned clubbing caves are not just Shanghai exclusive, they are now becoming commonplace throughout China, Beijing and Guangzhou are just three cities home to a plethora of these clubs.

However, on the other side and going far beyond these so-called super clubs, we find the likes of Beijing Gulou East Main Street venue DADA and Shanghai’s (now closed) Elevator, packed to the rafters with expats and trendy Chinese hipsters. These clubs are| were all about that gritty, raw edge — like a nightclub from early 2000s EDM Walhalla Berlin that’s been dropped in the middle of China.

The fashion here tends to be laid back: Trainers and t-shirts, a world away from the super club fashion. In fact, it’s so dark inside the clubs that usually what you’re wearing doesn’t even matter anymore. It all becomes about the music and people from diverse cultures and backgrounds coming together to enjoy it.

Perhaps the super clubs of Shanghai should feel nervous about the lively and booming underground scene quickly evolving on their doorstep. We smell competition. 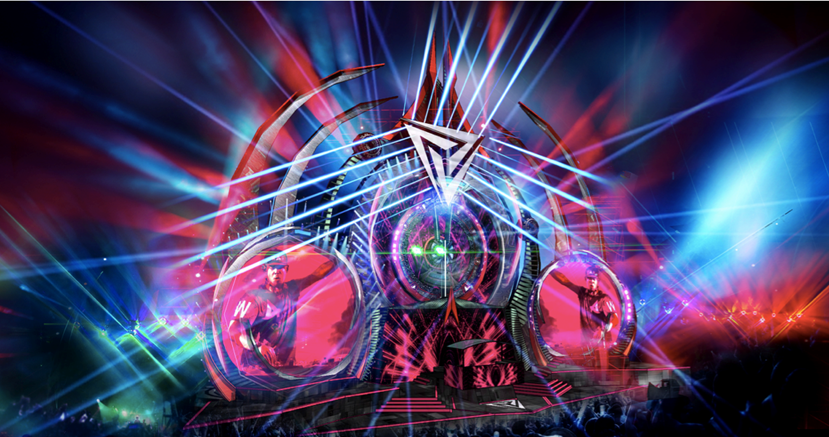 What’s more, it’s safe to say china’s underground scene is experiencing a power surge in terms of festivals. For example, the Storm Electronic Music Festival in Shanghai has been happening on stages since 2013 and continues (well, until 2017, at least; no magic eight ball here) to grow in terms of color and design. Or think about the Yin Yang Great Wall Festival (returning to the stage in June 2019), where electronic music has made it onto the set of one of the world’s most ancient wonders. Foreigners and Chinese alike traveled from far and wide and in pursuit of dance music and self-expression.

It’s safe to say that the dance storm is brewing and spreading outside of Shanghai and its first-tier compadres, into locations such as Nanjing and Changsha. Though these festivals are becoming heavily commercialized, they are responsible for making EDM and dance music more prevalent across the vast land that is the Middle Kingdom.

Summing up, then… Mainland China has evolved into a global, international country, as has the music. With new underground venues incessantly sprouting from first to third tier and young artists emerging, the sky’s the limit for EDM, dance and the overall underground scene music in China.

Perhaps China’s next greatest export will be its thriving underground music scene and the hip contemporary style collective that’s maturing along with it. Tomorrowland is today’s nation; from sub-bass to supernova!

Spotted a fail or have something to add? Send out that message in a bottle to elsbeth@chinaundertheradar.com

Copyright@China Under The Radar, 2019. All rights reserved

@thehotpotlab : "Our favorite installation, Bubbles, is also the most significant one inside our exhibition. These giant orange metallic balls symbolize the boiling bubbles in a Sichuan hot pot, famous for its spicy taste. The metallic texture of the material is chosen for its luster to mimic the boiling broth.
Loading Comments...
%d bloggers like this: